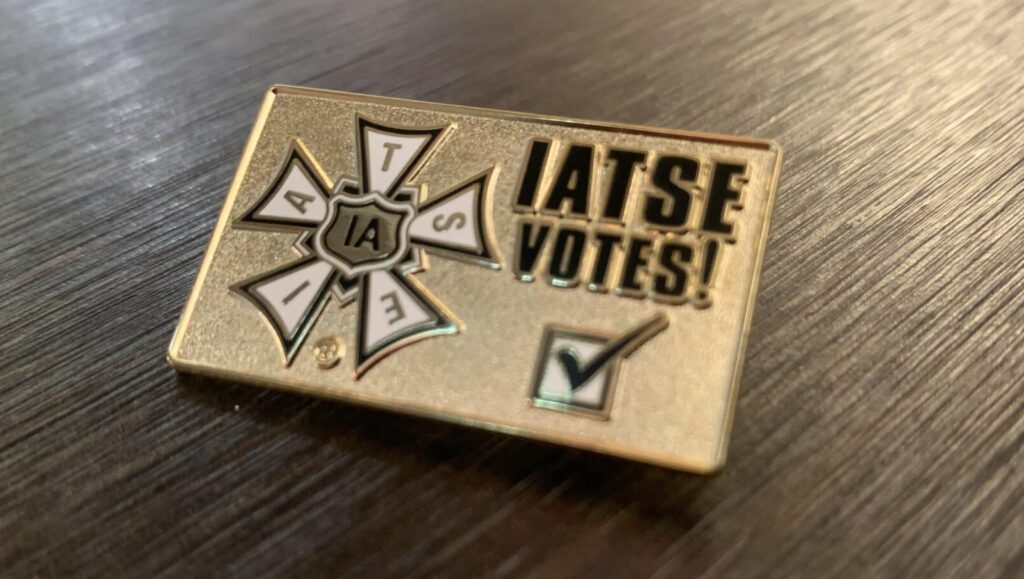 Contracts between IATSE and AMPTP address quality-of-life issues such as rest and meal breaks; boost revenues from streaming; include raises for all members and lift those at the bottom to a living wage. LOS ANGELES – Members of the International Alliance of Theatrical Stage Employees, Moving Picture Technicians, Artists and Allied Crafts (IATSE) have voted […]

North Bethesda, MD —Negotiators for IATSE Local 868, the Treasurers and Ticket Sellers Union, and Strathmore, Maryland’s world class performing arts center, reached a tentative agreement this week for a new contract, ending a rancorous two-year dispute between ticket sellers and the Montgomery County venue’s managers. “It is our hope that with this agreement we […]

Los Angeles, CA — Wardrobe workers at the Hollywood Pantages Theatre represented by IATSE Local 768 will be leafletting outside the venue starting Thursday, November 11th at 7pm PST to demand equal treatment. The workers, who are predominantly women and LGBTQ+, are paid $99 less per performance on average and receive 60% less in contributions […]

TORONTO, ON – In a show of overwhelming support, stagehands at Centre Culturel Desjardins in Joliette, Quebec, have determined that they will join IATSE Local 56. The decision from the Labour Relations Board of Quebec was issued on November 3 and awards IATSE Local 56 jurisdiction for all stage technicians employed by the Centre. The […]

LOS ANGELES – The International Alliance of Theatrical Stage Employees (IATSE) will announce the results of the ratification vote for the Basic Agreement and the Theatrical and Television Motion Picture Area Standards Agreement on Mon., Nov. 15. The agreements affect approximately 60,000 film and television workers across the United States. Last month, IATSE reached tentative agreements […]

NEW YORK – Late Sunday, 23 Local Unions of the International Alliance of Theatrical Stage Employees (IATSE) reached a tentative three-year agreement with the Alliance of Motion Picture and Television Producers (AMPTP) for the 2021 Theatrical and Television Motion Picture Area Standards Agreement. The agreement was reached with the unanimous recommendation of the Bargaining Committee […]

In March 2020, twenty-one Stagehands at College Street Music Hall in New Haven, CT voted unanimously to unionize in an NLRB-supervised election. For the previous year-and-a-half, they have been fighting to obtain their first collective bargaining agreement at the venue. Negotiations had remained stalled over the Employer’s refusal to contribute to the IATSE industrywide healthcare […]

We are heartbroken and devastated to learn that one of our members, sister Halyna Hutchins, died yesterday from injuries sustained on set while working as the Director of Photography on Rust in New Mexico. Our entire alliance mourns this unspeakable loss with Halyna’s family, friends, and the Rust crew.

IATSE 212 to Represent Several Positions on Stampede Grounds (Calgary, AB – October 21, 2021) The International Alliance of Theatrical Stage Employees, Local 212, won a certification vote today to unionize workers who build, tear-down and facilitate events on the Stampede grounds, including the Greatest Outdoor Show on Earth – The Calgary Stampede.  The yes votes […]

LOS ANGELES – A nationwide strike that would have started Monday was averted today when the International Alliance of Theatrical Stage Employees (IATSE) reached a tentative three-year agreement with the Alliance of Motion Picture and Television Producers (AMPTP) for The Basic and Videotape Agreements which affects 40,000 film and television workers represented by 13 West Coast IATSE local unions.  The proposed contract addresses core issues, including reasonable rest periods; meal breaks; a living wage for those on the bottom of the pay scale; and significant increases in compensation to be paid by […]